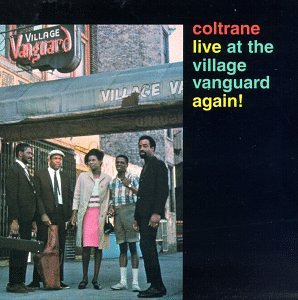 'Live At The Village Vanguard Again' is the stub of a (lost) longer recording of a 1966 show featuring Trane, Pharoah Sanders on tenor and flute, Alice Coltrane on piano, and Jimmy Garrisson and Elvin Jones on bass and drums as usual. Oh, and Emanuel Rahim on percussion, too. What fascinates me about these late Coltrane live recordings is the raw emotion, and this record is no exception.

Without a doubt the main attraction here is the contrasting styles of Trane and Sanders, best seen on 'Naima'. To Trane, this has always been a lush ballad, expressing the deep gratitude he felt towards his ex-wife, the woman that he credited with saving him from drug addiction in the late 1950s. So he plays his heart out - I never fail to be moved by the way he plays this piece. Sanders had no such concerns though, and takes the piece somewhere much darker during his extended solo. Reflecting perhaps the darker side of Trane's emotional state in those late days, Sanders sounds almost to be in tears, his tenor audibly wailing. Sanders clearly felt very much in debt to Trane (as did many of his generation) and went on to show his gratitude with a fine reading of 'Naima' in the 1980s (on his LP 'Africa', on Timeless records).

Next up is 6 minutes of Garrisson playing solo as the introduction to a surprising version of 'My Favourite Things'. One associates late period Trane with the free-noise assaults of 'Ascension' and 'Om' but this piece opens with a funky Garrisson backing up a sweetly melodic Trane on soprano. Things soon take a turn for the bizarre as Trane gets further out, but the band never lose the plot, there is always a rhythmic thread. Sanders is effective on flute, adding texture and colour behind the soaring Coltrane.

Alice Coltrane was well in the band by this time, but she was still developing as a player at this time and often sounds like she's in another band, her clumsy block chords no match for the virtuosity going on right next to her on stage. Better was to come from her, and soon - see her gutsy piano playing on 'Gospel Trane' from her LP 'A Monastic Trio' for example.
Posted by Anonymous at 6:04 PM

Hello Daily Jazz
I like your blog. You're on my links. We're not so many in the jazz family !
I run a blog for the female jazz singer www.shesingsjazzandmore.blogspot.com and I just started a new one for the saxes.
Welcome for the visit.

Very sorry for the stupid question, but where are the download links on this site? I can't find them. And I love jazz.

Excellent site. Question, where are the links located. Stop by my blog at ROCKCITYGENTLEMEN.BLOGSPOT.COM

Great blog. I like the format. Stop by mine sometime.

Hello, Daily Jazz
An excellent jazz blog, but where are the download links on this site? I can't find them.Can you send at my address, please?
m.constantin@menara.ma
Many thanks

please send the secret code to the links

Thank's for sharing.
It's possible to have the links or codes for this one?

please send to me the linx!

hi there, a very nice compilation you have here. meatier than many others.

can i have the url for coltrane at vanguard please?

Here are some Coltrane videos for the Coltrane fans....

uhh.. that's Rashied Ali on drums. Elvin was long gone by then