Tina Brooks - Back To The Tracks 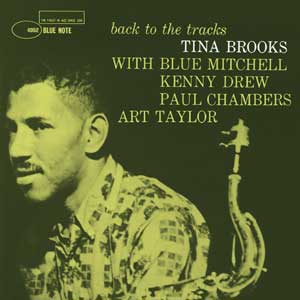 Those of you who've been reading for a while will know how much of a Tina Brooks fan i am. Very few tenormen have come close to the easy virtuosity of Harold Floyd Brooks. He recorded only a handful of times, with only 3 records as leader being released in his lifetime. 'Back To The Tracks' comes from the album of the same name, one of the many great 'lost' Blue Note LPs. This 1960 recording was slated to come out at the time and even had a catalogue number (4052) and sleeve. For some reason the release was pulled and the record didn't see the light of day until it came out in Japan in the early 1980s. I've previously written about another blue note release, Jimmy Smith's Cool Blues, that also suffered a similar fate (Brooks is featured on that LP, too). I was lucky enough to track down a recent vinyl repressing which sounds fantastic.

What marks this LP out from other Brooks releases on Blue Note is the presence of the hugely talented Jackie McLean on alto; 'Back To The Tracks' is an umptempo blues that nicely demonstrates the similarities between Brooks' and McLean's styles. Both are natural virtuosos, and despite the quick pace both create a sense of spaciousness in their playing that makes it sound easy. You know that muscians making a piece sound as easy as that just has to be very, very difficult.
Posted by Anonymous at 3:23 PM 4 comments:

Thought i'd post another Marion Brown on the radio player. If you're not familiar with his work you might not appreciate how different 'Spooks' was from his usual style; fear not, as 'Exhibition' will show you the way. Instead of tight, controlled riffing, you get long sprawling solos along with a sense of formlessness created by the floaty rhythm section. That's why 'Spooks' is such a shock - subversive (in terms of being totally different from what the rest of the avant-garde were up to) and brilliant.
Posted by Anonymous at 2:57 PM No comments: 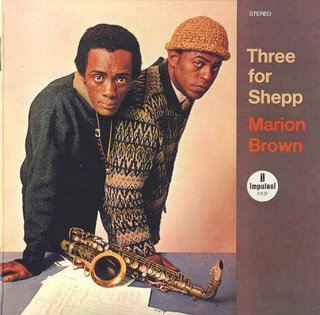 Altoist Marion Brown came to prominence with his appearance on John Coltrane's seminal 'Ascension' in 1965, but had in fact been recording at various sessions for about a year before that famous date, mostly under the leadership of Archie Shepp. Consequently, there was a great deal of gratitude felt by Brown for Shepp, and it gave rise to this 1966 album in much the same way that Archie had recorded 'Four For Trane' in 1964.

The album consists of one side of Brown originals with the other having been written by Shepp. 'Spooks' kicks off the second side and blows Brown's tunes into the weeds. The Brown side is very much in keeping with his ESP dates - long winding pieces that develop slowly while keeping up the usual free jazz exploration. But 'Spooks' fires straight in, the staccato introductory figure sounding reminiscent of a roaring twenties hot five (Shepp was always keen to explore the history of jazz in his music). The upbeat feel and rhythmic drive continues throughout the solos; Stanley Cowell on piano in excellent form, then Grachan Moncur III on trombone and finally Brown himself in his distinctive style. Shepp doesn't play, but he doesn't need to, his personality is stamped all over the track - so it's even more of a feat that Brown manages to retain some of his style through it all.
Posted by Anonymous at 9:13 PM 3 comments:

We Love You Oscar Peterson

Not sure what this is all about - read the full story at Surreality Times - but it looks as if legendary Jazz pianist Oscar Peterson is taking some stick at the moment. I can't comment on that, but it surely is a great excuse to take a look at the life of a Jazz stalwart.

Like so many Jazz musicians, Oscar showed musical ability from a young age, and had his future shaped by hardships. In Oscar's case it was tuberculosis that gave him the opportunity to develop his skills on the piano. After hearing Art Tatum (and nearly giving up, being so intimidated!) he was inspired to become a full-time jazz musician, and when he got in tow with legendary producer (and founder of Verve records) Norman Granz, he was set. Incredibly, Peterson is still going strong today despite being 80 years old and having suffered a stroke. Apparently he's still playing incredibly strongly too, as this review notes.

On record Oscar's melodic sense and lightness of touch are well known. He can come across as unassuming, but there's real passion in his playing that's unmstakable. Add to this a fearsome improvisational technique and a strong sense of rhythm and I think you've got all of the ingredients of a great pianist.
Posted by Anonymous at 8:03 AM 1 comment:

Jimmy Smith - Walk On The Wild Side 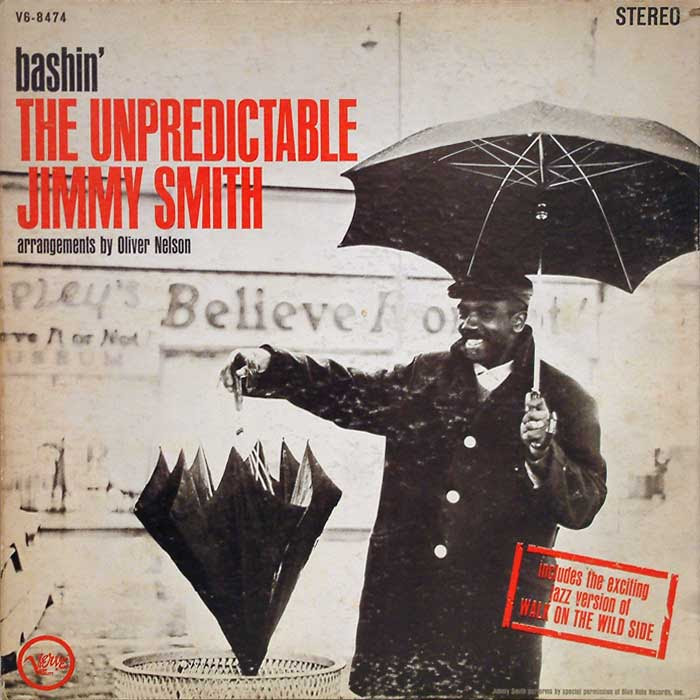 What better for a night when I'm in a big band mood than this? Coming right at the start of Jimmy Smith's fertile association with both Verve and Oliver Nelson, this is a lesson in both arranging and solo performance. The piece splits itself into two; the first half is the slow building band section, bringing out the original melody in a tight arrangement that has moments of high brass drama interspersed between the swagger.

Jimmy bursts in at the half way point with one of his trademark descending introductions, then proceeds to redefine the role of the organ in jazz (yet again). He manages to be melodic, inventive, funky and gritty all at once, as usual. Also featured is as fine an example of Jimmy's 2-note modulating solos that you could ever wish to hear. Then we get to hear what we all came for - Jimmy playing with the band in an exciting call-and-response section that leads up to the all-horns-blazing climax. Phew!

Any more information regarding the Jimster is best found here.
Posted by Anonymous at 7:34 PM 1 comment:

No apologies here - i'm sure some of you will complain that this "isn't jazz", but, well, it's on Blue Note, it suits my mood tonight, and that's good enough for me. The fact is that this is a damn funky take on a number by 70s rockers Traffic, played by a Dutch steel band. Now that does sound a bit odd, i'll admit, but have a listen and just try and tell me you don't like it.

It's an upbeat, funky tune that's perfect for good moods and sunny days. The first half of the track is a pretty straight take on the original, but the second half of the track is where it's at, with probably the only steel band solo anywhere in popular music. It's a proper solo, too, exploring the harmonic possibilities of the instrument as any good jazzer should.

I'd love to say more about this band but haven't found a whole lot out there. Maybe one of you knows something?
Posted by Anonymous at 9:35 PM 2 comments: