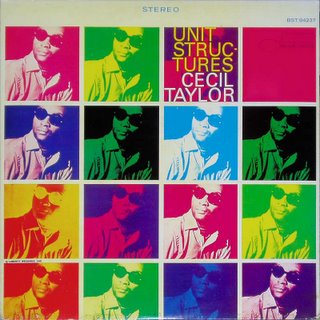 Pioneering free-improviser Cecil Taylor had a hard time of it in the 1960s. Following his seminal Candid sessions of 1960-61, Taylor didn't return to the studio until this 1966 Blue Note session. His music was considered too advanced, and his confrontational attitude didn't help him in his quest to be better understood (see this discussion for an example of that). His sleeve notes to this album don't help - i've made the point before that good free-jazz tends to be supported by a coherent concept, but these are somewhat impenetrable. Click here for an image of the rear sleeve and you'll see what I'm on about.

Over the 5 years between 1961 and 1966 Taylor worked tirelessly with his live band to develop the sound that's heard on this LP. Blue Note at the time was picking up as many 'free-jazz' artists as it could - sensing that something new was in the air, the venerable label didn't want to miss out. Sadly the music was considered so uncommercial and advanced that, after a second LP for Blue Note ('Conquistador', also 1966), Taylor didn't record again until 1973.

From the outset it's clear that this is not easy listening. What it isn't, though, is completely atonal. Despite the obvious lack of a clear melody, there are some harmonic ideas being thrown about the group - particularly in the early interplay of Lyons and McIntyre. Gale is excellent, too, but who could tell that the young trumpeter would soon relaease soul-jazz sides like 'Black Rhythm Happening'? Cyrille brings a rhythmic sensibility that can be clearly delineated. There is no 'beat' in traditional terms, but the oft-mentioned 'pulse' is clearly present. 'Steps' are just that - steps, or fragments of improvisation, a few seconds long only, being traded by the whole group. The lack of a clear focus (e.g. a main soloist) does add to the confusion initially, but becomes liberating, democratic even, with further listens.

'Enter, Evening' - the title sounds like a stage direction - and so does the music. The melodic, dramatic, sinister opening sounds perfectly suited to some sinister shenanigans on the silver screen. 'Unit Structure' starts out as a sequel to 'Enter...' before racking up the intensity and ending with a wild, percussive Taylor solo that brings to mind a quote regarding his playing style - "one could say that Taylor's intense atonal percussive approach involves playing the piano as if it were a set of drums". After that intense section, 'Tales' comes as something of a relief - an unaccompanied piano improvisation played by Taylor, emphasising the quieter aspects of his style, and showcasing his skill at the keyboard.

Quite simply, this is Taylor's masterwork - certainly not to be bettered by it's other Blue Note sibling - and is a must for anyone serious about their free jazz.
Posted by Anonymous at 9:07 PM