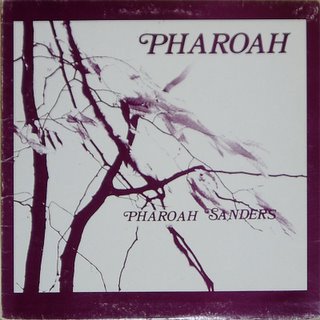 1. Love Will Find A Way
2. Memouies of Edith Johnson

First impressions? Well, it's not like the Pharoah that we've come to know and love from 'Karma', 'Black Unity' et al. Not initially, anyway, as side one opens with a laid back funky groove and some surprisingly tasteful meandering on tenor from Sanders. The rhythm builds slowly, with new sounds and greater complexity being added all the time, in a manner not entirely dissimilar to an Indian raga.

Many times on previous albums, especially on 'Village of the Pharoahs', i'd hoped to hear Sanders play with a guitar, and here he does - surprisingly effective it is too, carrying the rhythm nicely as well as taking a solo on 'Love Will Find A Way' which is highly reminiscent of the great Carlos Santana. This track is also one of the first where Sanders lays down his sax and starts singing - the lyric is simple, but uplifting. There's a funky organ, too - most unlike the early 70s Pharoah.

Finally, 'Memories of Edith Johnson' closes out the set with more mellowness, but this time in a far-eastern-gospel-fusion style. (it actually sounds better than you would think from that description). That is to say it has some church organ and gospel-style vocals over a backdrop of pentatonic rambling.

Not an essential Sanders LP, by any stretch, but an intriguing chapter of his development from avant-garde pioneer to mainstream jazz artist.
Posted by Anonymous at 6:35 PM