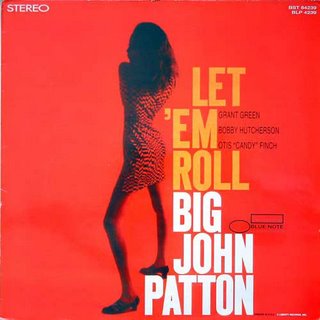 It's hard to believe that in 1965 it was considered odd to introduce a vibraphone to a soul jazz combo, but that's exactly what 'Big' John Patton did by including Bobby Hutcherson in the line-up for this 1965 Blue Note recording. Perhaps best known for his avant-garde sessions for the label, Hutcherson brought a swinging edge and tonal colour to a tried and trusted formula. That's not to say that the record would be dull without him - indeed the interplay between Patton's organ and Grant Green on guitar is nothing short of telepathic at times.

Originally a Hank Mobley tune, 'The Turnaround' started life as a blues but here it gets a new lease of life as a decidedly funky slice of soul jazz. Patton sets the tone with his opening riff before Green and Hutcherson double up on an extended reading of the theme. Then it's up to the soloists. First comes Green, spare yet funky, with some lovely harmonics coming out in Patton's inspired comping. Then there's nothing for Patton to do but steal the show with an extended organ solo that plays around with Green and stays seriously funky with a side order of jazz improvisation. Oh, and did I mention that it's got a real laid-back vibe to it? Close to perfection.
Posted by craig at 7:42 PM

I'm not cure you've put across just how damn groovy this number is. If you're ever looking for happening '60s jazz, this has to be the place to start. I have a few more things to say about it over at A Song For The Day