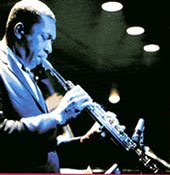 After last night's Archie, and particularly his soprano playing on 'Un Croque Monsieur' (see this post), i awoke this morning with fragments of John Coltrane's soprano saxophone sound drifting around my head. They've been stuck there all day, so in an attempt to move on to something else, a few words about Coltrane and some of the music he played on the soprano.

Coltrane took up the soprano in the late 50s, towards the end of his tenure with Miles Davis. A number of reasons have been postulated, including gum problems that precluded playing his usual tenor, and the increasing interest in the straight horn in general, mainly due to the work of dixieland-cum-free-jazzer Steve Lacy. The straight configuration of the horn allowed him to play faster than had been possible, and the different embouchure gave him a slightly different tone. His tone on tenor has always been firm, but on soprano it's much harder, but with a transparent, floating quality, like glass. 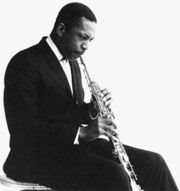 The two pieces I've been focusing on are amongst his most famous works, and are both interpretations of well-known pieces of music. 'Greensleeves' from 'The Complete Africa/Brass Sessions' is the first. The tune will be immediately familiar to anyone with ears, but here it gets a swinging treatment courtesy of messers Tyner, Workman and Jones. Trane starts out gently with a tasteful solo that uses the theme as a jumping off point for some lyrical, harmonically tasteful playing. He exhibits exactly the sort of 'hard as glass' tone that I described above. There is some brass here, too, but they're kind of relegated to backing the theme statements. Good thing too, as there's never really any need to play along with one of Trane's 60s quartets.

The other piece that has kept me happy today, and in it's time redefined the use of the soprano in jazz (yes, you can blame Trane for Kenny G) is the great 'My Favourite Things'. Again, Coltrane starts out gently, treating the theme as a china doll before breaking out of Rogers & Hammerstein's conventional style into a masterclass of modal post-bop jazz. What's amazing is that he manages to keep the whole 13 minutes accessible to a non-jazz audience while still leaving the aficionados gasping. This duality was turned on it's head in later performances where the theme was simply a jumping off point for extended, often free improvisations. Witness the 57-minute version caught on tape in 1966 on the impulse! album 'Live In Japan', for example. But to get back to the point, he plays soprano beautifully on the original recording with that same firmness of tone that makes him a pleasure to listen to.
Posted by craig at 10:04 PM

still loving what your doing...keep it up

That Live in Japan album is pretty awesome... I think Coltrane plays alto on it, too (the CD cover shows him holding an alto, anyway)!